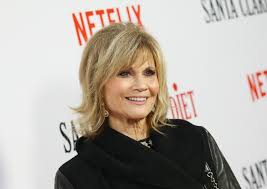 Markie Post (born on January 11, 1955) is an American actress best known for her roles as Jennifer Marlowe on the 1980s sitcom Mr. Belvedere and Faye Resnick in The People v. O.J. Simpson: American Crime Story. Markie Post was born on January 11, 1955 in Portland, Oregon, to Jean (née Fitch), a homemaker, and Harry Post, a businessman. She grew up mainly in La Jolla until she was five when her family moved to the San Francisco Bay Area where she attended high school.

Markie Post married writer Don Price on August 9, 1988. They have three children: Zoë, Willow, and Louis. They live in Burbank, California. She is a well-known environmental activist, having been involved in several grass roots efforts aimed at saving the world. She is also an animal rights activist and vegan advocate. Career Her professional acting career began on stage as a co-lead in Tony Kushner’s children’s theater production of Angels in America: A Gay Fantasia on National Themes. She also acted in the David Lan play Once in 1979 and 1980. Post won a San Francisco Bay Area Theatre Critics Circle Award for her role as Maria Shukshin in The Visitors (1983). Post appeared in minor roles in several films including Little Women (1984) and the 1985 film The Last American Virgin.

Post graduated from the University of California, Berkeley with a degree in theater arts, at which she also performed in several theater productions. Post made her film debut in the 1977 comedy film The Mutilator. She had a small role in the 1980 film Cooley High before becoming a regular on the ABC sitcom Mr. Belvedere from 1981-1984. She co-starred in the sitcom Again, Jane in 1985 and reprised her role as Jennifer Marlowe in The Real L Word from 2009-2013. Post also made appearances on My Three Sons, Tim Conway’s Conwaycam, Good Times, and the Disney movie Pete’s Dragon. She had a supporting role in the film Joe Versus the Volcano in 1990, starring Tom Hanks, and guest starred on Mr. Belvedere. Markie also made an appearance on Law & Order in the role of a psychologist.

Markie Post was nominated for a Golden Globe Award for her portrayal of Jennifer Marlowe on the sitcom Mr. Belvedere and a supporting role in the 1977 romantic comedy-drama film Love Affair. She also received a Primetime Emmy Award nomination for Outstanding Supporting Actress in a Comedy Series for her work on Mr. Belvedere. Post’s other roles include one on The Waltons and a recurring role on Grounded For Life. She is probably best known for her roles as Faye Resnick in FX’s The People v. O.J. Simpson: American Crime Story and as Ellie Cooper on HBO’s About A Boy. Early Life Post was born on January 11, 1955, in Portland, Oregon. Her father is businessman Harry Post, and her mother is Jean Fitch, a homemaker. Post’s father died in 1982.

Post received critical acclaim for her portrayal of Faye Resnick on the FX true crime television drama The People v. O.J. Simpson. Post won an Emmy for her performance. Resnick’s often-quoted line, “Don’t forget your panties!” during the 2005 trial of Simpson, was written by Post. Post filed for divorce from her husband, newspaper columnist and novelist Richard Wolffe, in May 2018. Wolffe was named in the indictment and subsequent plea deal in former Trump attorney Michael Cohen’s court testimony. Post also accused Wolffe of physically and psychologically abusing her. She stated that Wolffe beat her on several occasions, including one time when he pistol-whipped her, causing a hand injury that required five stitches to close.

Markie Post was very gifted in acting from the beginning of her childhood. She got a scholarship to the San Francisco Academy of Dramatic Arts at age 15. In 1977, Post appeared on the national television show Star Search. In 1980, she started her career with a role on the television series Mr. Belvedere, appearing in the show’s first season in the role of Jennifer Marlowe. In 1982, Post got a recurring role on the sitcom, Maude. In 1985, she was featured as a nurse on the sitcom Another World. Post had her first starring role in the independent film Chain Link in 1986, and went on to appear in a variety of independent films during the late 1980s, including High Times, Curse of the Demon and Love Crimes.